Our Work
Where We Serve Our Schools Beyond Education Post Graduation

Africa is a continent of striking contrasts, color, texture and cultural diversity. With its broad expanse of more than 11 million square miles of sweeping plains, exotic wildlife, tremendous human resources and boundless potential for economic growth, it is a continent desperately needing to be nurtured and developed.

At the same time, the face of Africa has many disturbing images. With an explosive population of over 1.2 billion people, Africans confront daily the extreme challenges of poverty, disease, famine and malnutrition. Despite Africa’s tremendous problems, it is a land of great promise. Its people are strengthened by a rapidly growing Christian church.

While Africa may seem a world away, we are worldwide community linked by economic necessity, brotherhood and global responsibility.

Kenya is located on the equator in East Africa, just south of the Horn of Africa that juts out into the Indian Ocean. Kenya’s population of more than 50 million has suffered greatly in the past years due to epidemics of malaria, cholera and AIDS, and to a devastating East African drought that caused mass starvation across Kenya. Over half of Kenya’s population is under the age of 15 years. Moreover, less than a quarter of Kenya’s land is arable. The inability of the land to support Kenya’s growing population is forcing people into cities in search of employment.

Nairobi is a modern city of more than 3 million people. Like the rest of the Africa, Nairobi is a place of contrasts. Two out of three people in Nairobi live in slum areas. Many coming into the cities have limited education and are marginally employable, so they end up in places like Kinyago-Dandora. A majority of families live in homes made of sticks and mud with no windows, water, electricity or sanitation.  Six to eight people live in a room the size of an average American dining room. There is usually only one bed and children sleep on gunny sacks on the ground. There is no money for proper nutrition, health care or school fees. Many children are forced to work long hours at hard, even dangerous jobs to help provide food for their families. The average daily income for a head of household is less than a dollar per day. 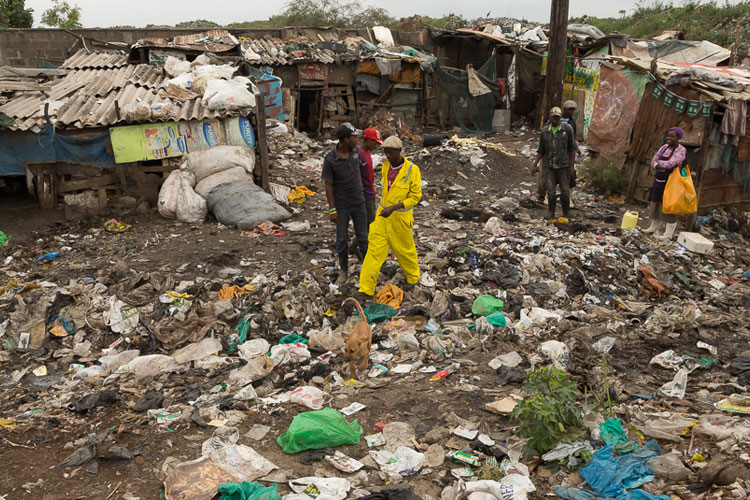 Other social issues include crime and disease which continue to ravage the community. Additional issues include substance abuse, increasing numbers of street families and orphaned children who are unable to provide for themselves.

Your donation to Kenya Children’s
Fund supports healthcare,
nutrition & a Christ-centered
education for all our students.